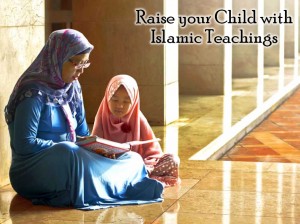 Few times back Muslims focus in bringing up their child with the teachings of religion Islam and the Muslim culture in which all grown-ups in the community proudly take the role of guiders for the Muslims children. No any child dared to speak up and act up in front of their elders in alone or in any gathering. All the Muslim elders took authority to maintain the discipline in home and in their child without showing their much wrath but today the case is totally changed. Nowadays, parents are not giving their attention in training their child according to teaching of Islam and because of the lack of attention children tend to disrespect and misbehave their elders, they no longer have fear or respect for anyone and parents does not consider these things small.

Parents realize late when something happened wrong and then they ponder over it that what they gave this much freedom to their child, they themselves dig a big hole for them. Being affectionate and loving your children is one thing allow them to do whatever they want to is not part of training because of this freedom their children remain unaware of the teaching of religion Islam. Nowadays parents themselves are spoiling and ruining their child, parents are forgetting the actual duty of making their child a righteous Muslim and a better member of society. If we say that television and media has taken the place of the parent in the recent era then it is not wrong, this is free hand of parents and media from where the child gains ill-mannerisms.

When the Muslim child starts speaking a little then it is a duty of parents to teach the name of ALLAH Almighty. In the old times when mothers put their child to sleep on bed she chant ALLAH ALLAH, but now mothers let their child sleep by playing the games and listen the music.When these kinds of children, who in their childhood are not taught the teaching of Islam by their parents, when they are mature they realizes that they are completely shattered and ruined and they do not have any mannerisms to deal with anyone, they feel embarrassed because they tend to copy which surrounding and media taught them.In order to grow your child better then teach them with all Islam knowledge and follow the virtuous deeds so that your child will also follow your footstep and becomes productive and virtuous Muslim. Parents must take care about their acts and behaviour because their child will follow them. They must try never arguing with their spouse in front of children, never curses your child, performing namaz and reciting Holy Quran and following other Islamic obligation and acts of worship Salah in front of them.

Muslims families should keep this in consideration that their lack of attention can spoil the life of their children and their proper training can make their child better Muslim. For bringing up the child as better Muslim, parents both mother and father recite Holy Quran in from of them and teach them the actual message of religion Islam and the meaning of the Holy Quran, perform all five times daily namaz and take them to Masjid and tell them the importance and obligation of performing namaz, and tell them stories of our Prophets after telling them stories give them the central idea and the lesson and moral of the story, this thing will help in adopting good habits and teach them the difference between right and wrong. When they becomes little older, teach them about the five Kalima, Imane Mujmal, Imane Mufassal and encourage them to learn these all by heart, and teach them proper and accurate way of performing namaz.

Raise them in under the teaching of religion Islam and create fear of ALLAH Almighty in their hearts, send them to Hafiz or Maulvi or any authentic Islamic scholar to teachings of Islam and to learn the proper recitation of Holy Quran and to get the knowledge of the Islam so they ill aware and know the beautiful religion Islam to which they belong. Teach your child the concept and the procedure of gusl, wuzu, and salah. If ALLAH Almighty blessed you with taufeeq then make your children Hafiz or Hafiza or Alim or Alimah.

Teach your children that this world is temporary and this will going to end soon and then we will live in the actual life which is eternal and whatever we do in this world we will be accountable for that in the world hereafter. This will stop him or her in indulging in wrongdoing and he then will not even think to do any act or deed which is prohibited in Islam.

Teach your child simplicity and try not to expose them to the materialistic approach if world. Teach them to keep themselves away from the lavishness of life and just value of doing their own act and work. Send them to universities and college and make them better and productive human and teach them to make halal career and earn halal in this world, prepare them to run their professions as honest Muslims and better human who know what is right and what is wrong.When parents start practising the teaching and obligations of Islam then they will be able to make their child a better Muslim and a productive human being for a whole society.

Cheapumrahpackages.org is one of the authorized Hajj and Umrah travel agent based in UK offers a range of Best 2018 Umrah Packages from UK.