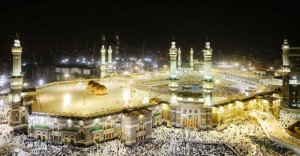 The most sacred place in Islam is the Kaaba located in Mecca or Makkah, Saudi Arabia. The Kaaba is a masjid, built by Hazrat Ibraheem (AS) according to Muslim traditions constructed around a (Hajre-e-Aswad) black stone. The prophet Muhammad (PBUH) designated Mecca as the holiest city of Islam and the direction (qibla) that all Muslims offer while praying namaz. The Kaaba is considered to be the first place that was created on this universe and the place at which heavenly power and bliss touches the world directly.

Makkah is located in Hijaz region of western side Saudi Arabia. The city lies inland 73 kilometres east of Jeddah, in narrow, sandy Valley of Abraham. The Holy City Makkah is located 277 meters above the sea level. Each year, millions of Muslims from all around the world join in a pilgrimage to Makkah (the Hajj and umrah), in fulfilment of one of the Five Pillars of Islam. The significance of Makkah for Muslims is immeasurable. All Muslims, wherever they are on world, perform five times a day in the direction (Qibla) towards the Kaaba in Makkah. The direction of namaz is very well known as the qibla in Islam.

The Religious importance of city Makkah

In addition to namaz or salah, a pilgrimage to Makkah (hajj and umrah) is required for every Muslim who can easily afford it as one of the main Pillars of the imaan (faith). Every year about millions of people from different regions gathered for the main pilgrimage, or Hajj, during the Islamic calender month Zil-hajj, and many Muslims perform the lesser pilgrimage, or Umrah, at any time throughout the year. Several non-Muslims have ever seen the rituals and rites of the Hajj, as non-Believers or non-Muslims are strictly prohibited from entering Makkah and Madina.

The central point of Makkah is the House of ALLAH that is the Holy Kaaba, the “House of ALLAH” believed by all Muslims to have been built by

Hazrat Ibraheem (As) and his son Hazrat Ismaeel (AS) and that is completely covered in a gold embroidered black coloured fabric. While performing Hajj or Umrah Pilgrims do Tawaaf (circumambulation) around the Kaaba seven times and they also try to kiss or touch (Hajr-e-Aswad) the Black Stone. Pilgrims also drink water from the well of Zamzam. The water of Zamzam is assumed to have many special properties.

While performing the Hajj pilgrims travel to Mina, where the Shetan (Devil), symbolised through stone columns. Then pilgrims precede to the mount Arafat a place for prayers, where our beloved Prophet Muhammad (PBUH) is believed to have delivered his last or final sermon. The Masjid-ul-Haram (Sacred Mosque or masjid) is the holiest mosque on Earth for all Muslims. Both the city Makkah and the mosque itself are very important and respectable for non-Muslims.